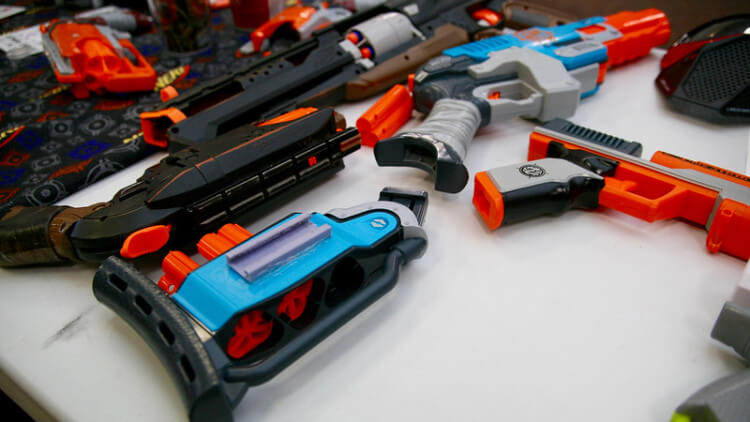 It’s so interesting diving into new hobbies. Nerf guns are one hobby I didn’t think was actually a hobby – but upon some research, I realized there are entire communities who collect, modify, and play with nerf guns. Let’s find out if this niche is a good target.

PS – Here’s a fun video I found just because…

The first reason is because Nerf guns are fricken awesome. But besides that, it’s a pretty low competition niche. I’ve found a LOT of keywords that are easy targets. I even found a handful that had pretty much no competition at all! If someone wanted to go into this niche and dominate with decent SEO and good keyword research, they totally could.

Here are just a few keywords I found with zero competition:

Here are some areas to cover:

What makes me hesitant to go into this niche is that it nerf guns are probably mostly sold on Amazon and have low commissions. The commission rate for toys is 3%, and nerf guns aren’t super expensive either (about $100 max).

The good news, however, is that there is a huge spike around the holiday season where people are loading up their shopping carts. If there were to be a big spike like this, it’s good it happens around this time of year.

There are more opportunities for affiliate earnings than just Amazon. On Etsy, people sell custom guns for as much as $300.

Still, Etsy is a less popular platform and even though they have more expensive products, their commission is only 5%.

The next two sources of revenue I would look at are ads and then info products. I was able to find two nerf gun review sites that were getting at least 10k monthly traffic. One site was at the 10k mark and the other that was above the 20k mark, which is enough for ad income.

As far as info products, you could easily create and sell an “official” rule ebook with different nerf games and strategies. You could even make up your own games and variants even.

If you were super enthusiastic about this niche, you could also sell mod kits and do drop shipping as well. There are lots of nerf products on Alibaba.

Your best bet for getting images aside from product images is from Visual Hunt (make sure you filter by commercial use and give credit).

Another way get images is by going to Nerf meetups and taking pictures of all their gear and action shots.

Yep, there are lots of communities too:

There are even Nerf clubs! Check out this Google map listing for Nerf clubs.

While the competition is easier in this niche, I wouldn’t expect a lot of earnings, mostly due to Amazon’s low rates for toys. Content also seems limited, but you could expand into other niches like laser tag, water gun, outdoor games, or even LARP.

This niche could be fun for beginners who want a low competition niche or even for the experienced SEOs who want to dominate this niche without a lot of effort.

To work well in this niche, I would go after all the keywords I could to get above the 10k mark for ads and make this more of a passive site once all the content was written.